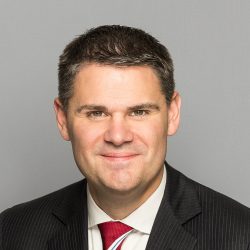 He is responsible for Operational Services including Emergency Protective Services, Information Technology, Waste Management, Environment/Sustainability, Site Support Services and Corporate Affairs including Nuclear Regulatory Affairs, Indigenous and Community relations, Communications, Corporate Social Responsibility and Government/Stakeholder relations. In his role he is also the executive lead for the Site Lease with the Province and Isotope development.

More broadly in the energy sector, he serves as a Generator Representative for nuclear and Vice Chair on the Independent Electricity System Operator Stakeholder Advisory Committee. He is also a Member of the Advisory Board for the Ivey Policy and Management Centre.

James sits on the Board of Life Labs, Canada’s largest independent provider of laboratory services, and is Chairperson of the External Stakeholder Relations Committee of the Board.

His passion for health extends to the important role Canada plays supplying life-saving isotopes. He serves as Chair of the Canadian Nuclear Isotope Council, an organization formed to ensure the critical supply of Isotopes for health and industrial purposes is secured for the long-term and also as Co-Chair of Ontario’s Nuclear Advantage.

James is actively involved in many community organizations and charities through the efforts of Bruce Power’s community investment and sponsorship program, environment and sustinability fund and the indigenous community investment fund. He has been a long-time supporter of Easter Seals previously serving as a member of the Board and Chair of the Fundraising Committee and received a diamond award of distinction for his efforts in 2016.

James served as Vice-President Corporate Affairs and Environment for Bruce Power from 2012-2018 and Head of Corporate Affairs from 2011-2012. From 2006-2011, James served as the Executive Assistant to Bruce Power’s President & CEO, while leading various company initiatives including new-build development projects and environmental reviews in Ontario, Alberta and Saskatchewan. During this time he served as part of the transaction team enabling the expansion of the site to eight units of operations through various agreements between 2007 and 2013.

Between 2014 and 2015, James was part of the Bruce Power team which successfully negotiated a long-term commercial framework with the Province of Ontario, extending the life of the facility to 2064 enabling the $13 billion life extension program. He also served as executive co-host for the 2015 International Atomic Energy Agency OSART Mission.

He has an Executive MBA from London’s Ivey Business School and a Chartered Director through the DeGroote Business School Directors College. James also holds a Master’s Degree from the University of Guelph College of Management and Economics in Leadership and a BA (Hons) and has completed Master’s-level Project Management certification through York University’s Schulich Business School.

James and his family live in Port Elgin, Ontario where he grew up and he is an active runner.