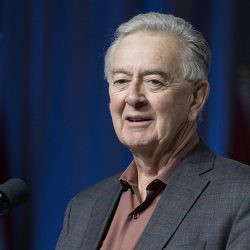 Preston Manning is the founder and the only leader of the Reform Party of Canada, a Canadian federal political party that evolved into the Canadian Alliance which in turn merged with the federal Progressive Conservative Party to form today’s Conservative Party of Canada. Mr. Manning represented the federal constituency of Calgary Southwest in the Canadian House of Commons from 1993 until 2002 and served as Leader of the Official Opposition from 1997 to 2000.

Mr. Manning has made major contributions to the intellectual and operational underpinnings of democracy and conservatism in Canada primarily through:

Upon his retirement from elected office Mr. Manning founded two not-for-profit organizations: The Manning Foundation for Democratic Education and the Manning Centre for Building Democracy. The purpose of these organizations was to strengthen democracy and the conservative movement in Canada by supporting and facilitating:

In July 2016, Mr. Manning resigned from his executive functions with the Foundation and Centre, and in June 2020 fully retired from the organizations although he continues to contribute to advancing and enriching democratic engagement in Canada though his media appearances, speaking engagements, writing, and contributions to various public policy development initiatives.

Leading up to his retirement, Mr. Manning explicitly requested that, going forward, the Manning Centre for Building Democracy focus exclusively on networking and relationship building among the various components of the conservative movement and that it change its name to better reflect this focus. The Centre’s name was changed to Canada Strong and Free Network July 1, 2020.

No description of the public life and work of Mr. Manning would be complete without full acknowledgment of the enormously supportive and inspirational role played, usually behind the scene, by his wife Sandra, their five grown children, and twelve grandchildren. Preston and Sandra continue to divide their time between Calgary, Vancouver, and a family ranching operation in central Saskatchewan.