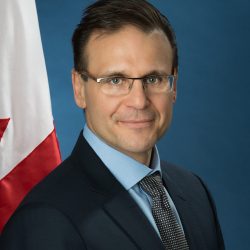 As Speaker, Senator Housakos met with several foreign heads of state, diplomats and dignitaries at home and abroad. He also served as Chair and a longtime member of the Senate Committee on Foreign Affairs and International Trade.

Senator Housakos is a staunch defender of human rights, freedom, and rule of law. He has often spoken out against regimes who do not adhere to these values and principles with motions and bills including calls for Magnitsky sanctions against the communist regime of China and condemnation of Turkey for its increased aggression and conversion of the Hagia Sophia.

As Chair of the Standing Committee on Internal Economy, Budgets and Administration, Senator Housakos was at the forefront of the Senate’s modernization in recent years.

Currently, Senator Housakos has several bills before the Senate including one that would require the federal government to draft and implement a federal framework for autistic Canadians and their families.
Over the years, Senator Housakos continues to spearhead efforts to raise funds and awareness for the Greek schools of Socrates and Demosthenes of Greater Montreal and for Giant Steps School and Resource Centre.

Prior to his appointment to the Senate of Canada, Senator Housakos, a graduate of McGill University, enjoyed a successful career in business while engaging in public service through various functions including serving two terms as Vice-President of the Hellenic Congress of Quebec and as a founding member of the Hellenic Board of Trade of Metropolitan Montreal.

The senator’s passion for public policy and service was evident early in life when he became involved with the youth wing of the Progressive Conservative Party at the age of sixteen. Following university, he went on to work as a staffer in the Ministry of Multiculturalism with the Honourable Gerry Weiner before running as a candidate for the Canadian Alliance in the riding of Laval West in 2000. He then served as an advisor to the Mayor of Montreal between 2001 and 2002, demonstrating a well-balanced resume at all levels of public service in Canada.

In 2018, Senator Housakos was invested as an Archon of the Greek Orthodox Church in recognition of his unwavering support of the church, his leadership within the Hellenic community and his work on behalf of all Canadians as a parliamentarian.

Senator Housakos’s greatest sources of pride and joy remain his wife Demi and their two sons, Peter and Tasso.